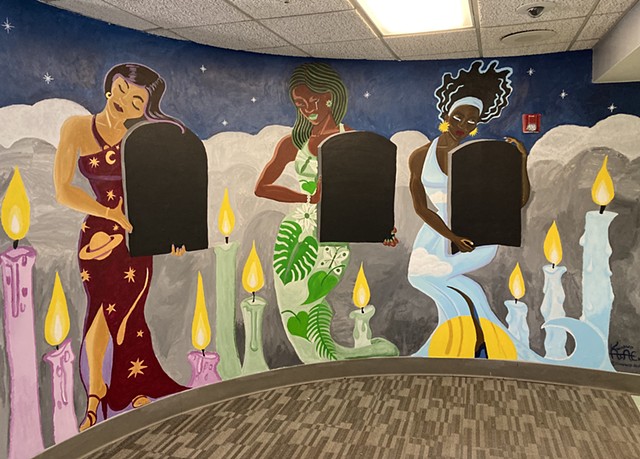 Loosely based on the painting by Fragonard, The Three Graces: Euphrosyne, Thalia, & Aglaia from Greek Mythology are traditionally depicted in visual art as scantily clad, jovial, laughter-filled, celebratory white women. Each Grace representing joyfulness, abundance, & brightness respectively in their ideal representations of the carefree prime of their youth.

This collaborative mural project serves as an anti-gun violence memorial, showcasing the burdens we as a society perpetually force Black and Latina women to bear in a country where they are most likely to be victims of, or forced deal with the traumatic aftermath from, the rampant gun violence in our country. The perpetual inaction of our elected leaders failing to pass sensible anti-gun violence legislation makes murals like this vital for students to hold emotional and psychological space.

Thus each Grace holds a tablet painted in chalkboard paint meant to hold space, emotions, and inevitably the new names of future victims of gun violence. In stark contrast to the traditional depictions of laughter; these graces are full of life, beauty, strength, and sadness.